Marcel Duchamp's Fountain is one of the most controversial but possibly one of the most important pieces of art created in the past 100 years. In this post I seek to peel back the layers and get to why I think that this piece of art deserves even more recognition than it gets.

On the surface the piece is a urinal, simply something that men piss in, most men will see this object daily and use it without thought.

Of course, Duchamp knew this and it's the reason he chose it as part of his series of readymade sculptures.

Perhaps the thing most people do when looking at this piece is disregard it as just a urinal but the story behind it is a lot more complicated and the reasonings for making this art go a lot deeper.

Dadaists are playful and humourous the choice of the signature, 'R. Mutt' was another conscious choice. 'R. Mutt' didn't exist, not 'Richard Mutt' the person whom this was attributed to. This character submitted the urinal to the Society of Independent Artists (of which Duchamp was a board member of) for exhibition and was hidden from view during the exhibition. 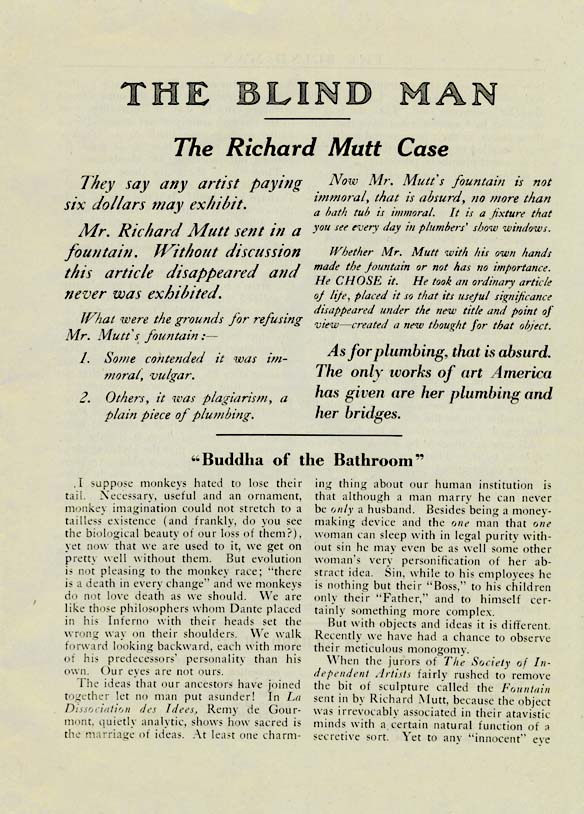 The above picture was taken from The Blind Man a Dadaist publication. Duchamp seemed to have been stirring up controversy deliberately around this piece of art. Two issues were ever published. Beatrice Wood, another Dadaist in New York was thought to have written the above.

Now, after this controversy was stirred up, the Fountain disappeared. This is commonly thought to be a mistake and that Stieglitz had thrown it out as with many of Duchamp's other readymades at the time. However I feel that it could have been a more important move in cementing the legacy of the piece.

Here we have a fake artist submitting a piece to a society of New York art critics and artists. The New York Dadaists then use it to stir up deliberate controversy in the art world and all of a sudden it disappears.

However it gets weirder.

After it's disappearance Duchamp authorised copies to be made of the work. Why did he need copies to be made? Because the manufacturer of the urinal has never been found. Duchamp says that he or another Dadaist in New York purchased it from a 'J. L. Mott Ironworks'. However much debate has gone into whether or not this is true [1]. The suggestion is that Duchamp or another artist may have made a copy of one of these standard urinals just to display as a standard urinal. Recent research has shown that another Dadaist might have made it 'Elsa von Freytag-Loringhoven' [2]. Which adds another thread to this already confusing and brilliant piece of art.

Duchamp's fountain marked a turning point in the art world. Most importantly it was one of the first pieces of art to separate work and merit for the artist and the piece. Something which has remained controversial throughout the 20th and into the 21st century. People still feel the need for work to be put in for merit to be attained by Fountain spits in the face of that but leaves you questioning just how much work was actually put in.

" And I thought, how ridiculous that this particular … pisspot gets carried around the world at—it costs about thirty or forty thousand dollars to insure it every time it travels. I thought, How absolutely stupid, the whole message of this work is, “You can take any object and put it in a gallery.” It doesn’t have to be that one, that’s losing the point completely. And this seemed to me an example of the art world once again covering itself by drawing a fence around that thing, saying, “This isn’t just any ordinary piss pot, this is THE one, the special one, the one that is worth all this money.”

So I thought, somebody should piss in that thing, to sort of bring it back to where it belonged. So I decided it had to be me. "