One slice of the Leeds music underground which never get talked about in much depth is that of the 'no audience underground', a term coined by Rob Hayler from Radio Free Midwich. That is, the scene of experimental musicians in which everyone plays a part, a DIY scene for sure but the 'no audience' part is not that no one shows up but instead that everyone plays a part in the performance or pieces of the performance at least.

Overall this is a welcoming scene and tonight was no different, Wharf Chambers was bustling, many familiar faces in the room as is usual at these sorts of gigs. Set lists are often played loose with late starts common.

First on were Trve Yorkshire Kvlt Ensemble, described as algorithmic death metal. The duo used live coding techniques mixed with vocals and synthesisers on a shared Supercollider window. They walked onto stage in their signature monk's robes and corpse paint. Their set started off pretty typical of metal with fast, stuttered, kick sounds but as time passed it devolved into a wall of noise, screaming and synthesisers, lights flashing like lightning. When they'd reached the peak, the noise cut back with just a minimal pulse left and they walked off into the back room leaving the music running and many people (including the sound man).

Next up was Anna Peaker, performing with a minimal setup of a loop pedal and some effects pedals with a single synthesiser she laid out a deeply textural lock groove dream-drone sound. Though the set was around 20 minutes long there was little variation instead a precise layering of sound through the addition of loops. Definitely 'hypnagogic' to say the least...

Sw1ne-Hunter was almost over as soon as he began, an absolutely demolishing wall of kicks, amplified strings, screeching, feedback. Ending the set with the classic pure tone piercing but relief from the wall. 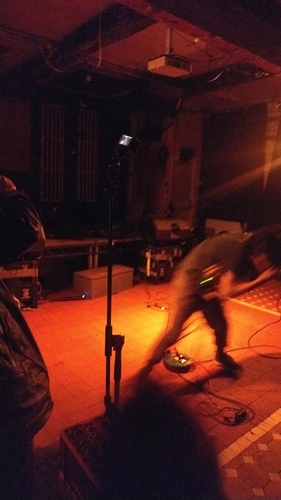 After this set Kazehito was in the crowd teaching everyone how to make a screaming mouth sound which was a nice foreshadowing for his turn. His equipment strapped to him with a harness, a mixer on his belly and wires coming out like an umbilical cord. Armed with a microphone in the mouth and only minimal equipment he filled the room with the noise equivalent of Michael Winslow sounds pouring out everywhere with sharp feedback.