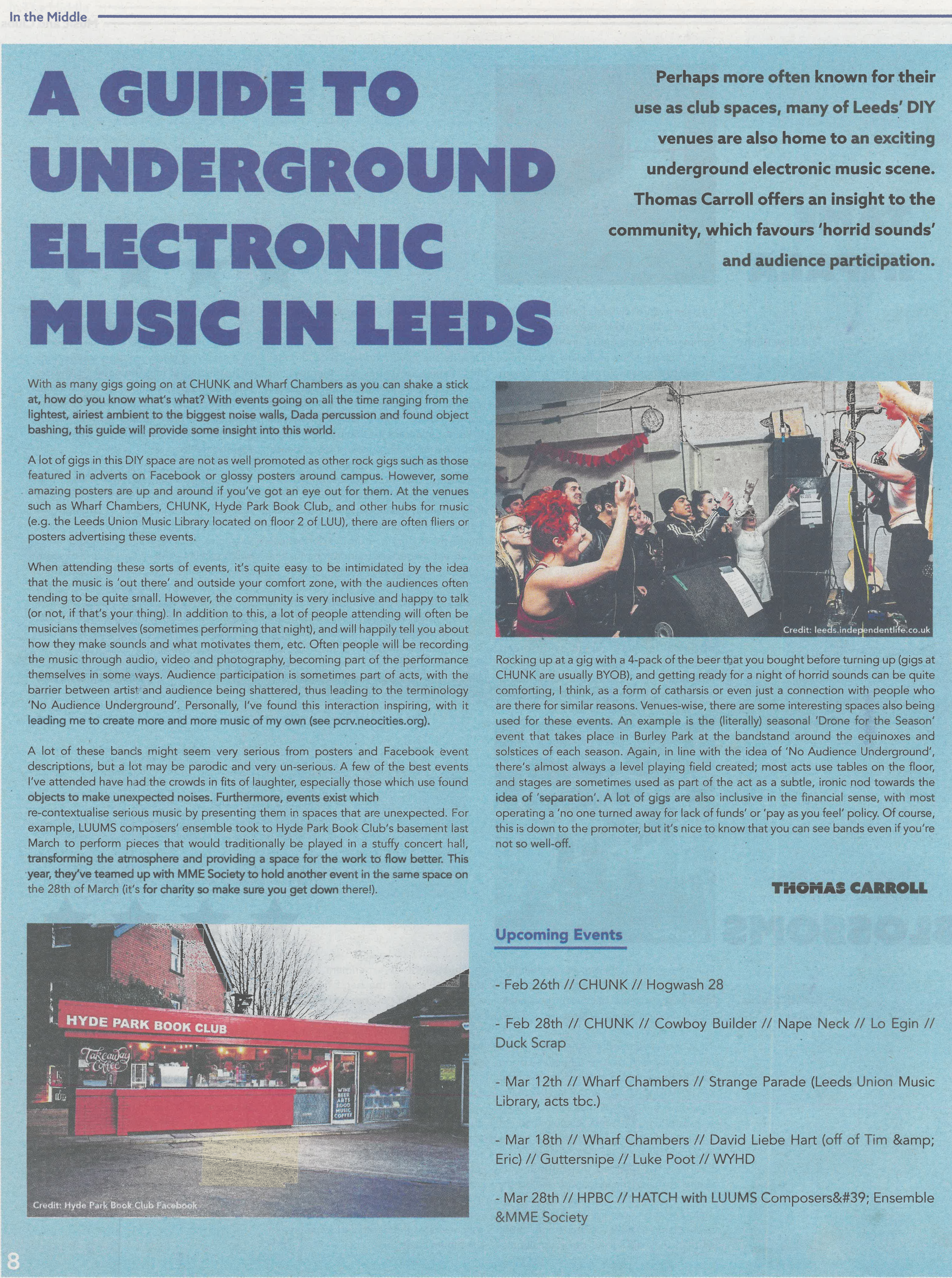 Note: at the time of publishing Hogwash was at CHUNK it has since changed venue to Wharf Chambers reflected below.

With as many gigs going on at CHUNK and Wharf Chambers as you can shake a stick at, how do you know what's what? With events going on all the time ranging from the lightest, airiest ambient to the biggest noise walls, Dada percussion and found object bashing. This 'guide' will show some insight into this world...

A lot of gigs in this DIY space are not as well promoted as other rock gigs such as those featured in adverts on Facebook, or glossy posters around campus. However some amazing posters are up and around if you've got an eye out for them, at the venues that these events take place like Wharf Chambers, CHUNK, Hyde Park Book Club, and other hubs for music (e.g. the Leeds Union Music Library located on floor 2 of the union) there are often fliers or posters advertising these events.

When attending these sorts of events it's quite easy to be intimidated by the idea that the music is 'out there' and past your comfort zone, and the audiences tend to be quite small, often. However the community is very inclusive and happy to talk, or not, if that's your thing. Further, a lot of people attending will often be musicians themselves (sometimes performing that night), and will happily tell you about how they make sounds, what motivates them etc. Further, often people will be recording the music through audio, video, photography, becoming part of the performance themselves in some ways. Audience participation is sometimes parts of acts with the barrier between 'artist' and 'audience' being shattered; leading to the terminology No Audience Underground. Personally I've found this interaction inspiring and it has lead me to create more and more music of my own (Here).

A lot of these bands might seem very serious from posters and Facebook event descriptions, but a lot may be parodical and very un-serious. A few of the best events I've attended have had the crowds in fits of laughter, especially those which use found objects to make unexpected noises. Further, events exist which recontextualise serious music to spaces that are unexpected, for example LUUMS composers' ensemble last year in March took to Hyde Park Book Club's basement to perform pieces that would traditionally be played in a stuffy concert hall, this transforms the atmosphere and allows the work to flow better. This year they've teamed up with MME Society to hold another event in the same space on the 28th of March (also, it's for charity so get down!).

Rocking up at a gig with a 4-pack of the beer that you bought before turning up (because gigs are CHUNK are usually BYOB), and getting ready for a night of horrid sounds can be quite comforting I think, as a form of catharsis or even just a connection with people who are there for similar reasons.

Venues-wise, there are some interesting spaces being used for these events also, as before recontextualisation of 'stuffy' music, but also of spaces, an example is the (literally) seasonal 'Drone for the Season' event that takes place in Burley Park at the bandstand around the equinoxes and solstices of each season. And again in line with the idea of 'No Audience Underground' there's almost always a 'level playing field' with the audience at gigs, most acts use tables on the floor, stages are sometimes used as part of the act too as a subtle addition of a nod towards the idea of 'separation'. A lot of gigs are also inclusive in the financial sense, with most being no one turned away for lack of funds or pay as you feel, of course this is down to the promoter at the end of the day but it's nice to know that you can see bands even if you're not-so-well off.