Harlow as a vision set out by Gibberd has failed. Perhaps due to a failure to predict the future or perhaps due to the fact that the town was badly designed this article sets out to discover why the first wave new towns tend to be so bad.

The legacy of the new town extends past 1946, when the New Towns Act was introduced and into the early 1900's when Letchworth and Welwyn Garden City were founded. Both of these were formed under the 'Garden City' movement. To remove people from polluted and crowded cities and into a greener area with better transport links. 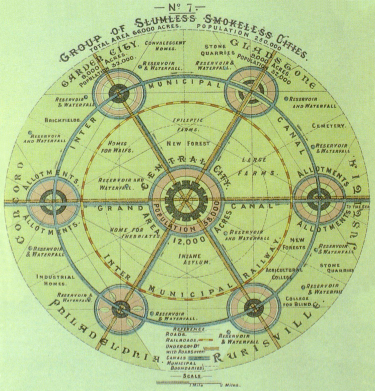 This movement posited that people would be better out of the city and away from the polluted air and into satellite cities around the main, bustling city that were cleaner, greener, and overall nicer. Often this is shown as above, with six garden cities spoking off from a central city.

Another linked concept is that of overspill estates, such as Becontree in Dagenham and later, many of the new towns in the area extending to Grantham and even Burnley were all overspill estates of London.

After the second world war, many poor people's houses were destroyed and in 1949 the New Towns Act was passed to designate the sites for the first wave of the new towns. These include Stevenage, Harlow, Basildon, and Hemel Hempstead.

These towns were often grand plans. Harlow was designed by Frederick Gibberd in 1947. It involved the full incorporation of the latest design techniques of post-war optimism.

The design of Harlow

Harlow was designed to be green, 'green wedges' were allowed between houses to break up the monotony of the Victorian style terraced houses. Attention was drawn to creating a variety of houses in an area. Experimental housing was also implemented in the first tower block in the UK, The Lawn (below). 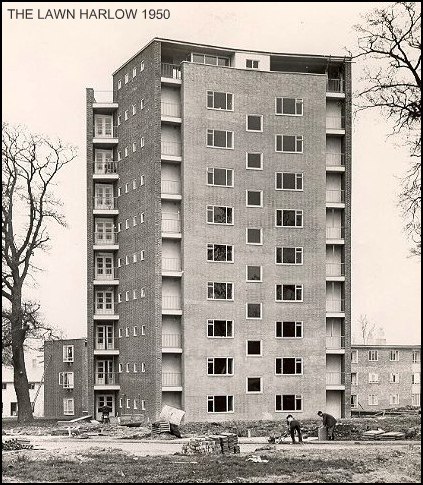 Care was taken with the culture that was to be implemented. A lot of estates had at least one sculpture made by famous artists. Who would have thought that you could put a Hepworth on a housing estate or a Rodin in the town centre? Harlow even has a John Piper mosaic in the church. 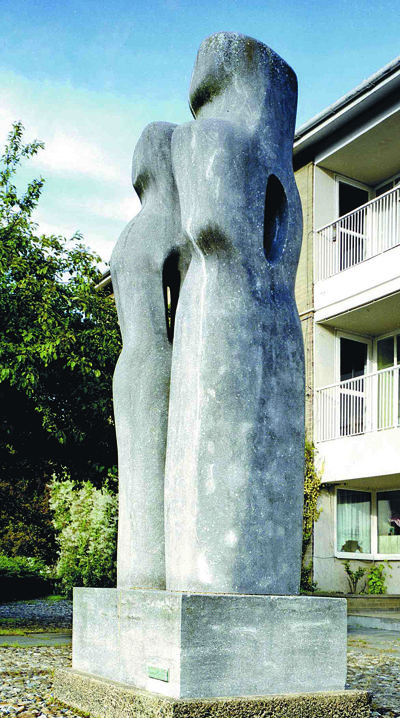 The problems in Harlow

Despite much care and attention being put into the town's planning, this vision wasn't fit for the future. And as a lot of post-war projects did, Harlow isn't able to adapt to the population who are growing older, the buildings that are failing and the pressures put on it by the economy and its proximity to London.

As anyone with older relatives will probably know they like to complain a lot. My grandparents are no exception but they're somewhat valid. When they moved from London into the new town, there was a level of quality afforded by the new infrastructure and ample money flowing into the town. However now, the town has stagnated and is, in many people's opinions going downhill fast.

A large cause is that seventy years on, the infrastructure that was so new and fresh has started failing and isn't being repaired due to the current government's stance on spending money to fix things that are obviously failing.

Not only that but the price of property in London is raising so high that councils cant afford properties to home people who need housing. Hence, emergency accommodation is being set up in office buildings in the town that is only just fit for human living, with basic partition walls and little modification the industry that was here has moved away and been replaced with the destitute. One such example is the Templefields House accommodation which has been described to me as dire by people who have had work in it. Not only the interior is dire but the location is as well, it is located in an industrial estate with factories surrounding it and no bus routes or cycle paths meaning that the residents will find it very hard to get to their jobs and their children to school.

This brings up another point, remember that back in the garden city plan, the satellite cities were supposed to have a population of around 30,000? Harlow has managed to increase this to around 80,000 which means that the original town features like the town centre were either defunct or replaced. Such an example is the redevelopment of the Water Gardens at The High to be a shopping centre and the home for the civic centre and council. This, whilst done fairly well is emblematic of the problems that the town has, it wasn't designed for 80,000 people

There also remains the fact that, whilst nitpicky maybe, there are too many cars! Harlow was designed in a time when the perceived need for a car wasn't such a big deal. Most households had either one or no cars and Harlow was designed with a lot of cycle paths, most of which are either not well kept or even completely useless. This has lead to a complete lack of parking and hence the starts of the removal and repurposing of the 'green wedges' as mentioned earlier. For the time being however cars and vans are mounting the pavement further leading to the destruction of the pavements and roads.

Not all of Harlow's issues are down to the early planning of the town and it's location. The M11, a major motorway running out of London, has caused the town some grief. Mainly by the town's location of its junction onto it. The main industrial estates are at the other end of the town as to where the junction is, this results in HGVs using the arterial B roads that run across the town (Southern Way mainly) and the complete destruction of the road surface. The position of this junction has also lead to constant traffic issues in the town if the M11 is shut.

A new development, Harlow North seeks to remedy some of these issues with a new junction to the M11 closer to the industrial estates.

In recent years crime has become a much bigger issue in Harlow, as has poverty. Now, this seems to be almost a country-wide issue but I'll focus on Harlow as I have done. Due to policing cuts bought about under austerity there are currently only three patrol cars in the town. Less so recently but in the past few years a few select traveller families have been involved in fights and general unpleasantness towards business owners. However, an injunction has been upheld stopping travellers from staying in the town.

There is no culture left, for a town with amazing sculptures and a rich history of creative types. There is a complete cultural void, save for an open mic night at the coffee shop and a few select events there's next to no cultural significance to the town. The only music venue, the Square was closed and demolished mostly to mismanagement by the charity that took it over when the business folded (perhaps a controversial statement but nonetheless somewhat true). The fact remains that there is a complete lack of aspirations artistically in the town.

How do we fix this?

Harlow needs urgent redevelopment of infrastructure and a plan to create a plan that will house people properly and sustainably in the future. This would help to create a more pleasant area for everyone to live in. Harlow North development is not this, it's too far detached from the town centre and will push for development further in the old town and cause perhaps the same problems as we see in the new parts.

Harlow needs to address it's cultural issues through careful engagement with the children in schools. There's a lot to explore here and I haven't once in school been taught anything about the planning involved in post-war Britain. They also need to create more space for art and show examples of art to children. I remember all of my art lessons consisted of drawing some 3D shapes and shading them, never once were the sculptures that surrounded us mentioned or explained.

Further than that the political dynamic in the town needs to change. The current MP Robert Halfon is a conservative and a fairly high ranking one at that. Though he has spoken with dissent for the party, he is very quickly silenced by them also. In the past he has been a decent-to-good local MP with a lot of presence and has done some good for the town. The council, as they often are is more focused on student-union politics as opposed to getting any improvement done in the town. Very unfortunately it looks like a tory safe seat for the time being and a labour council as usual.

Ultimately a lot of the problems faced by Harlow are similar to the rest of the UK but the layer of crumbling infrastructure makes it a lot harder to justify the increased developments like Harlow North when the rest of the town is crumbling. Yes, we need new houses but we also need what we have to function.

Someone once stole the head of the child Henry Moore sculpture Family Group and it was missing for a fair few years but was later found under a bed in a council flat.

Genesis' song Get 'em out by Friday mentions Harlow.

Prague 15 is twinned with Harlow and has a really ugly flag.