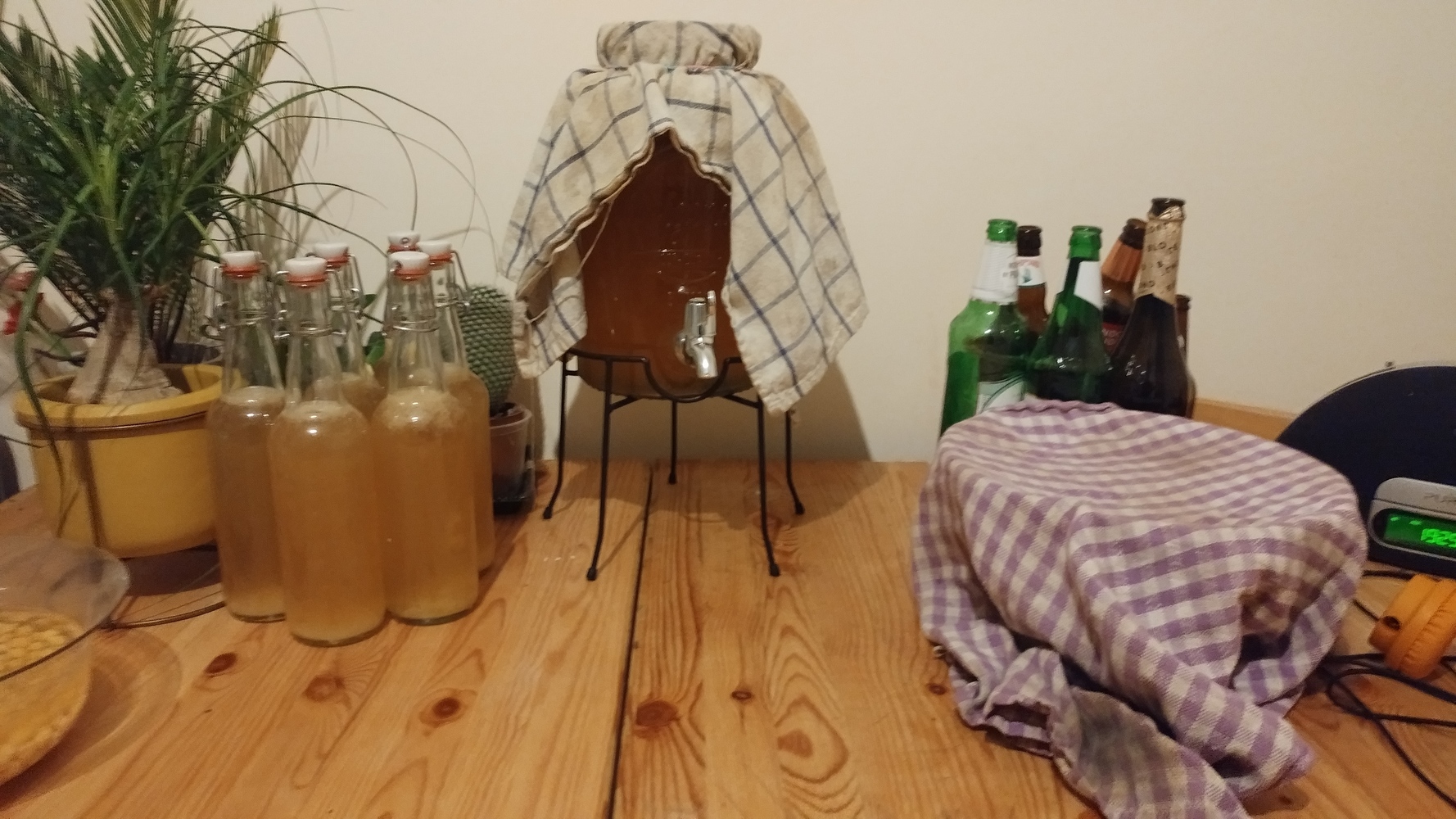 What's this whole 'kombucha' thing then?

Taking the world by storm recently because health nuts have been off their nuts on it, kombucha what I'd call a fermented tea-based drink (often flavoured). Others might call it a pro-biotic drink but I'm less inclined to believe in these sort of benefits for now.

Overall it's quite tasty and is somewhere between a fizzy drink and water whilst being probably much healthier. I know there's an opinion within 'kombucha purists' that this is pretty much sacrilege but if you're going to say something like that there's probably a reason for it.

Unlike a lot of ferments (bread, sauerkraut) kombucha uses both bacteria and yeast to ferment. In essence there a colony of bacteria and yeast that feed off your tea and sugar (we'll get to this later) to make acetic and other acids hence kombucha tasting a little 'vinegary' and acidic. This works with the yeast to limit the alcohol content in the beverage. The actual biological workings of the SCOBY are complex and don't really need to be explained here. Essentially, small stuff eats your tea to make a tasty drink.

Where do you get this SCOBY thing?

As always this is the part of the article where the writer says 'ask a friend who makes it' but there being is an issue if you don't have any friends. There are shops online that sell it but I can't really give any particular recommendations as I did the thing where I stole some off my friend (thanks Mia!).

How to actually do it

How to make it

In essence you just make sweet tea, cool it down, add SCOBY (and liquid from the last batch) then leave it for a while, bottle it, add flavours, wait a while more and it's ready. But lets go in more depth with pictures.

Below I will make ginger-flavoured kombucha.

Since this process is continuous and works in an around weekly cycle (depending on temperature mainly) I will start with putting a new batch of tea in the jar.

First brew sweet tea, I do this by boiling around 2L of water, once boiling adding the 250g of sugar then the 25g of tea and turning the heat off. I leave this for around 10 minutes meanwhile I grate ginger for bottling the previous batch. 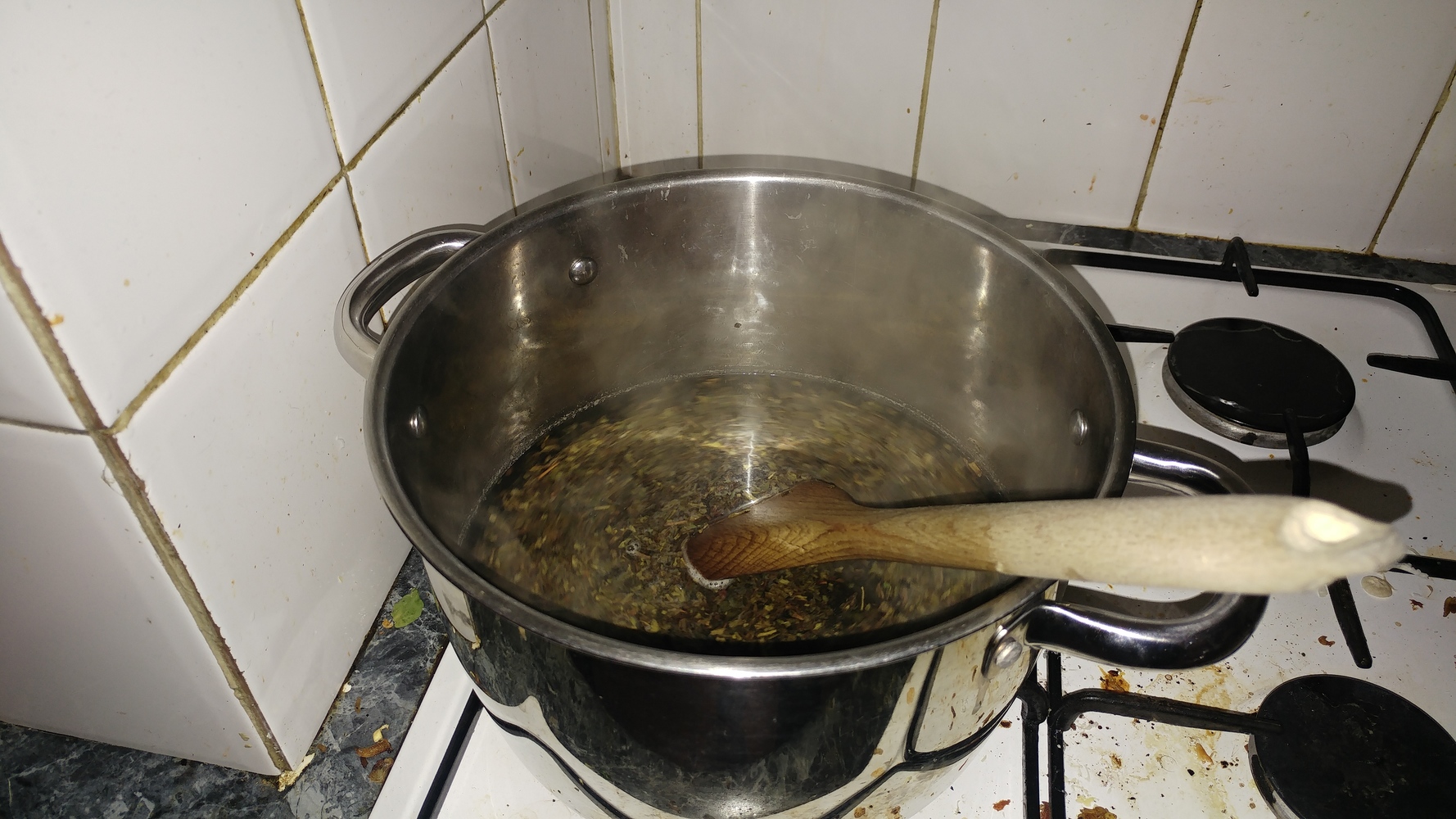 Once brewed I pour the tea through a fine mesh strainer into another 2L of cold water, this turns the concentrated tea from the hot pot into an average-strength tea to use in the kombucha. It should still be quite dark however, it will lighten up as the ferment takes place 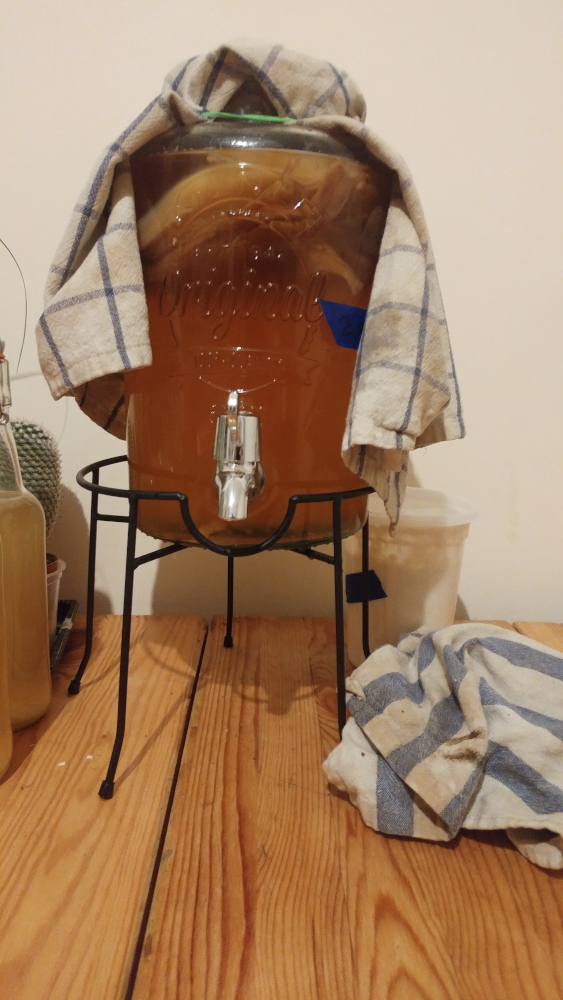 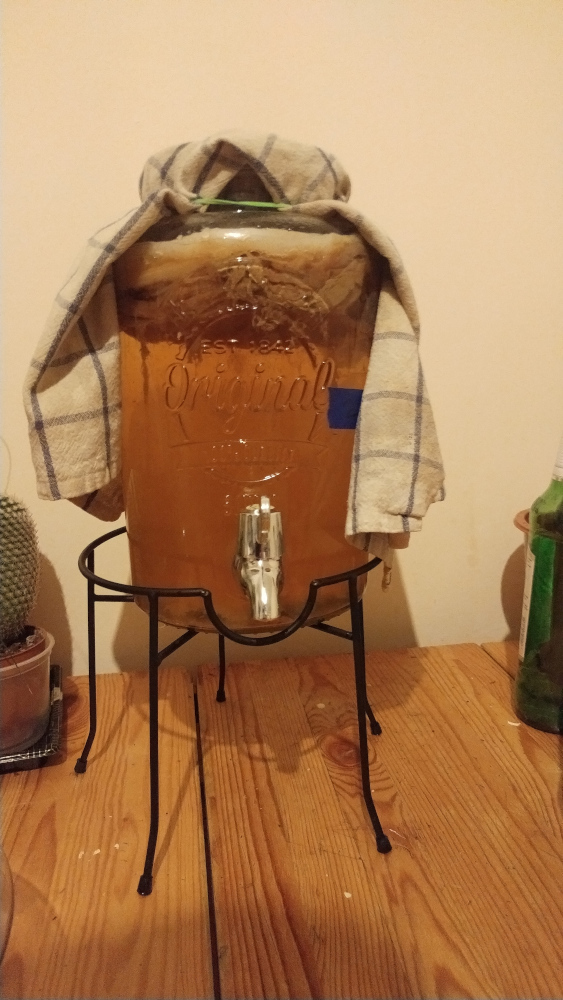 After this I check the temperature with my IR thermometer but it should just be warm-to-lukewarm (around 30-35C) before adding any SCOBY else you risk killing something.

After this I will bottle the previous batch removing the SCOBY before doing so (we'll get to this as well) and reserve liquid, around 500ml or so this is important to lower the pH to avoid mould, I've also seen things about it having bacteria that isn't in the solid SCOBY that helps out.

Then I add the cooled sweet tea to the ferment vessel and add the SCOBY back, covering with a tea-towel to stop dust and who-knows-what getting in.

Now we wait, how long though? It depends on what the environment is, as ever with ferments. Kombucha likes a warmer location (at least in part because it has yeast but that's conjecture) around 23-25C but I've been brewing in my drafty kitchen and all is fine. Taste daily after around 7 days to see what level of acidity is there keeping in mind that it will increase after bottling at least a little.

After the first (primary) ferment I bottle and add ginger. I grate the ginger with a microplane, usually against the fibre to make it easier to grate but it seems to release more juice which means more flavour! 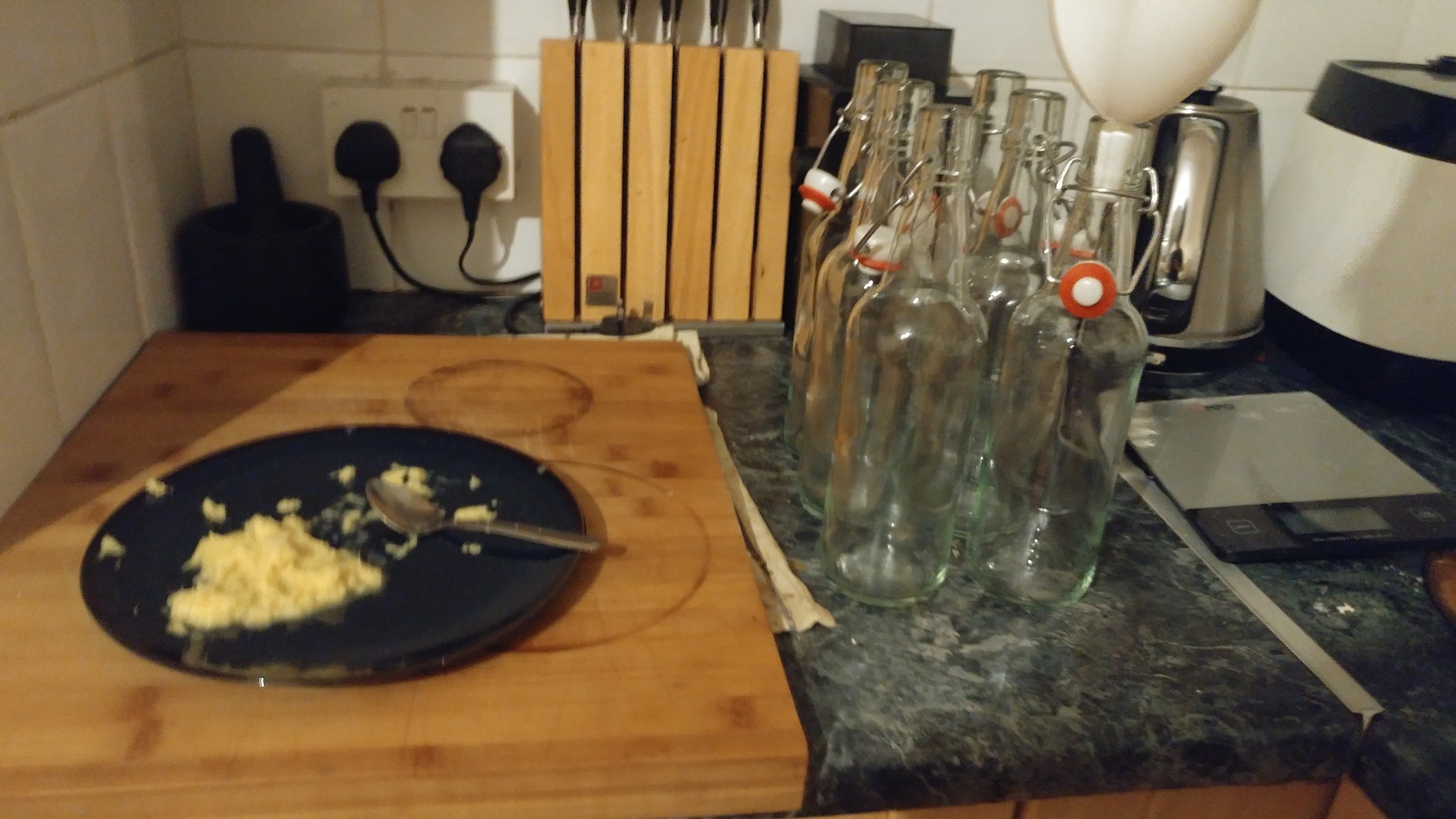 This secondary ferment is only around two or three days, bottling is quite easy with a tap like on my jar but you can as easily ladle into a funnel. Overall you'd do well to avoid adding too much sediment but a bit cant hurt!

After this I like to refrigerate to slow down both flavouring and fermentation. When you open the bottles you'll notice the drink has gotten a little bit fizzy and nicely spiced.

This is a nice continuous project that isn't too much effort for a nice drink especially as a replacement for fizzy drinks that is refreshing. In the future I'd experiment more with different flavours.

If you're in Leeds and want to try my kombucha I leave a bottle every week in the Green Action Coop in the union, If you want some SCOBY give me a shout and we can work something out :).