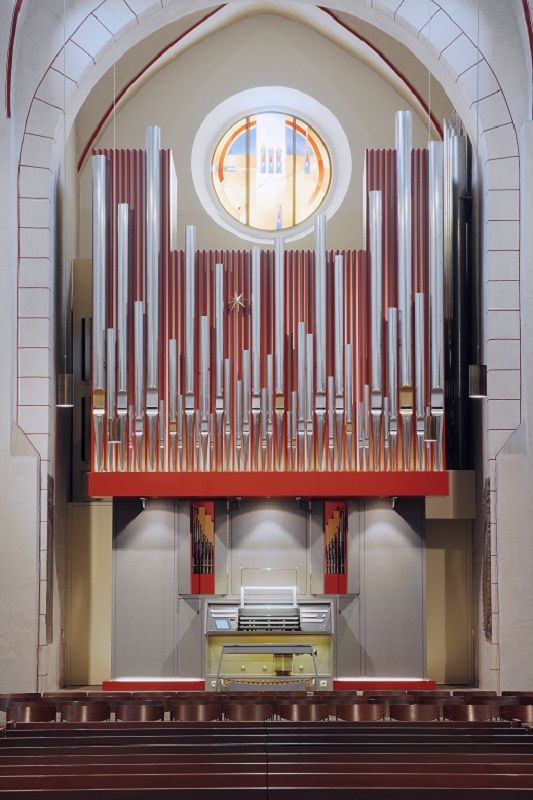 Two forms of art that we interact with most are architecture in music. The musician and architect are working towards the same goal in a lot of respects, some person has to exist in the space created by the work.

The approaches to the creation of music and the architecture of a building are similar, you can consider the listener as a single person (as is the case in a lot of pop music, the lyrics almost as a dialogue with the listener). Or the listener as a 'mass' of people (as in the case with sound designed for public spaces).

Both the architect and the musician need to consider the acoustics of the space they create, how do we exist within them and how do we hear things? If a building is beautiful but is composed entirely of hard, concrete walls people will not want to spend time in it. If you create a composition but do not consider the sounds used to play it or else people will not enjoy it. More obviously sounds are often designed as if they were being played in a space (e.g. reverb). Where architecture is limited however by a number of factors (engineering, budget, so on) music can exist in a world free of those limitations, even the safety of the listener can be ignored to an extent.

Both are mediums which are consumed almost passively and, as in my last post Music is Photography are commodified to a large degree. The difference here is that the interaction of music and architecture is a very much considered phenomenon, through the use of audio in spaces, both public and private transformations of the space are possible. Perception of time can be shifted, the 'mood'; audio slips to the back of the mind and manipulates the imperceptible. Is it any different to say that when slight beams through a window creating forms on the walls, the same happens?

Perhaps the church is a place where this can be felt most, when a church organ plays it fills the room with an energy unrivalled. The building almost seems to be one with the sound. Of course, for a church organ to be in the building, the church has to be designed around it's placement and, more, the placement of the pipes. Often organs are placed behind the congregation but can be included at the front near the altars, or even in the middle of the building (as is the case in King's College Chapel in Cambridge, on top of the Rood Screen). Churches are some of the most considered architectural projects not least because of their cost, the designers had to consider the sound not only of the organ but the voices of the preachers. Surely then we should think about this in buildings today?

It is important to note that perhaps music can be considered to be an emergent property of architecture too, after all if the architect is designing how the space of their building sounds are they not in some sense making music? Projects such as The Zadar Sea Organ are surely architectural in nature. Buildings create a sound that is shaped by the work of the architect, is the rhythm of a loose tile being stepped on by a crowd music? Why shouldn't it be?