If you ask an online marketer what metric is the most important, you will probably hear something to the effect of 'engagement' or 'click through rate' this is what websites want. Youtube's 'algorithm' optimises (currently) for watch time, twitter will be more likely to show you content that has a lot of likes or retweets; more importantly you like engagement.

How do we disseminate information? It's a strange question, media is very good at doing it implicitly. Transfer of information is done at scale with very little thought as to what exactly the information that's being transferred is. This is part of the reason that the American cultural context has seeped around the world even if media is still produced by the countries themselves. Showing a TV show or movie brings a load of information about the context in which it is produced.

Social media operates on the principle that you will interact with the platform, and sustain themselves by making their platforms the marketplace for content. Youtube, of course is the most obvious example with a very strong monopoly for online video content. It makes sense then that the most successful people at creating an ecosystem for information to be shared will be using these platforms as the designers intended. Implicitly you must play the games of the social marketplace inherent to social media to gain attention.

When using social media there are strong incentives (mostly psychological) to gain subscribers, likes, retweets, comments, replies etc. Platforms are designed to make you feel good when taking part in these actions, whether it be liking someone's post having a cool animation or sound, or notifications when people reply to you. People do try to mitigate this by turning features off but it's baked into the whole system of the platforms it's hard to avoid.

Thus even the most prominent leftists, even whilst disseminating radical messaging must be playing these market games and gaining social capital to be in a place to disseminate this information. Whilst a lot of leftists do grapple with this idea, and speak about it, there's still this view of the individualist intellectual working apart from their peers. Most websites have a policy that an account should only be one person. This suppresses the idea of a collectivist view of the world, not only in terms of politics but also in terms of art and culture. It is now very hard to find movements or collectives online even though the means to do things like it are there because of this atomisation through making content very individualist.

In the early 00s there were many forums just for sharing art, music, film but now there exists a motivating force to keep it to yourself as you can make gains on this attention marketplace by creating and distributing art, people with a large following can easily launch other's work into the limelight but the value of this is too great to do it regularly, or without promoting yourself in return. There's no way to be a large producer and share work with a smaller producer without it being exploitative in some way or upsetting followers & fans, to become a producer is to set yourself away from others as a brand.

We can see this on Youtube where personalities will be a single person, the channel named after them even. But as they grow and the expectations placed on their content do to they have a need to hire more staff that are often uncredited apart from mentions every now and then. The Youtube channel is centred around the personality and not the content and the team behind it. Youtube say themselves that you should:

Think of your channel like a shopfront – give it the right look to show off your style.

As the title suggests, there are types of content that are optimised for engagement. Interactive content will have way more engagement than a text post (like this), by the appetites of media consumption so will images. This has manifested in the sharing of leftist media through Instagram, squares of sans-serif text will act as primers to a discussion, being what they are they lack nuance as to what exactly is happening in a situation. That is not to say that they are not helpful as a form of getting information out, but Instagram does not allow linking to content from within a post (why? See the rest of the blog post!) there can be no extra information directly within reach i.e. not too many people will be typing in links from these posts. 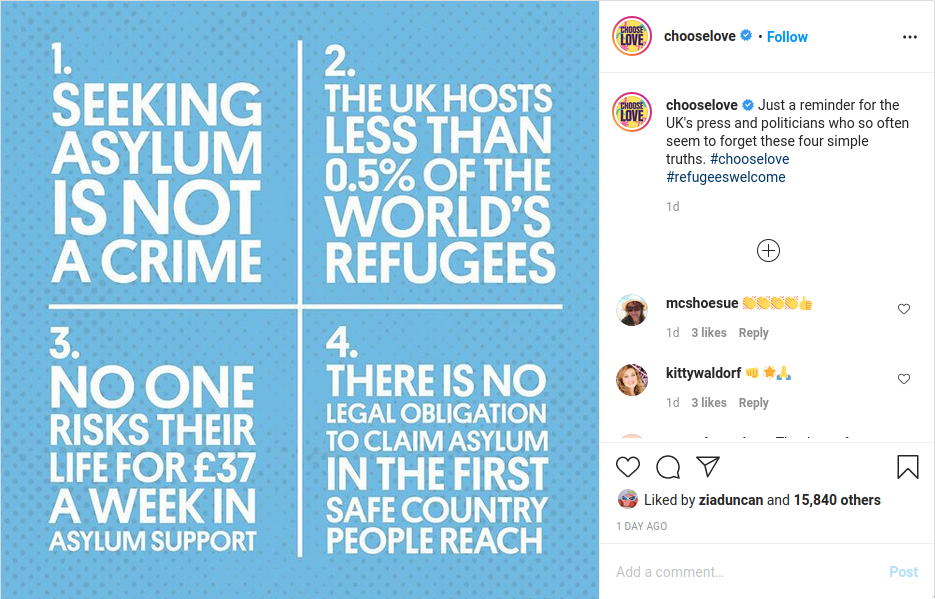 Videos similarly have a problem in that they are self-contained and linked to people's brands in such a way, the personality must appear in their own video or it's not their video, even if they are facilitating the production of it. An example of how this can start to be broken however is in the concept of 'Breadtube'; this is essentially a collective of Youtube channels that are broadly leftist and producing video essays on popular culture. They break away from the cult of personality at some level because they will call on other youtubers in the 'Breadtube community' to do voice-over, guest segments, etc.

Breadtube is not without its flaws however, and I'm sure many of the youtubers that act as part of it would agree, it's almost a false collective born out of people who have successfully played the status games and is insular to that, there is still this divide of 'producer' vs 'consumer' at play, and there always will be when platforms exist that place the attention on these people with thousands of subscribers. Not only do they get attention from their base but a large portion of views on Youtube comes from suggestions, thus playing the Youtube algorithm's games of prioritising watch time makes sense and will shape the content that gets attention on the platform.

How can be break from the idolatry of these platforms when they are designed to make us to exactly this, without escape, the only content we can discover is picked for us to optimise our engagement and part of that is investing into personalities and brands. As a smaller 'producer' how do you make content that invites collaboration and community?

One thing I've been interested in is the manipulation of these systems to create information that can spread without someone applying pressure as a personality or a brand. A great example of this is Neurocam; a PhD project by Robin Hely. Essentially a hoax surrounding a shady organisation 'Neurocam' that would assign it's 'agents' tasks to complete and the surrounding online community about it.

Neurocam was a self-sustaining project that involved the planting of the seeds of an idea and then allowing the idea to run wild.

For my PhD I have produced a film and a ficto-critical thesis that explores the issue of audience interaction as a primary determinant in the making of an artwork. The focus of the research is "Project Neurocam", an earlier on-line interactive project made by myself.

The main objective of the research is to examine the theoretical questions generated by this project—is it art? Where does authorship reside? Is it a hoax? What kinds of relationships does it construct?

The PhD thesis, written as if from the perspective of a participant, outlines a 'game' that sustains itself with participants leaving tasks for each other and similarly sustaining worldwide community of bloggers talking about it and making their own collective of 'Neurocam participants' to share ideas between themselves, this sort of thing is only possible with an understanding of how these groups form, act, and the ability to manipulate it. The reason that this might not be particularly useful for this dissemination of information is that you're creating closed but self-sustaining communities, they are, however are a collective community bound under a common goal which may be desirable.

Another example of this understanding of how information is disseminated and a manipulation of this is the Escherian Stairwell hoax, another university project. This hoax was quite fantastical, positing that there was a real life example of Penrose stairs in the Rochester Institute of Technology. Helped along by a viral video but also the creation of many websites that helped to obscure the facts that the video was just a convincing fake.

This understanding of the fact that Google would be a source to debunk the claims in the video was useful in being able to 'poison the well' when it came to fixing the search results in the hoax's favour. To the point in which it lead to conspiracy theorist-types visiting RIT to see for themselves, only to be disappointed.

Similarly the hidden site and hire-a-hitman scam 'Besa Mafia' used SEO to place articles that claimed that they were real at the top of search results leading to more articles about how they were allegedly real spreading around, this culture of creating a hoax, essentially, and being able to promote ideas through this is clearly quite powerful.

SEO is important to all kinds of web content, much in the same way youtubers 'optimising for the algorithm' is important but what's interesting to me is the idea of a dark side using dodgy techniques to promote businesses. Although a lot is 'clean' there are forbidden ways to manipulate the algorithms.

It's also interesting to note that not only do you create a community of believers in these hoaxes but also of non-believers that is to say that equal to you creating a band of people who think that they are real you will always get people teaming up to prove things that are wrong, wrong.

Memes as a cultural unit of exchange should not be overlooked either whether it's explicit i.e. "Google Jury Nullification / USS Liberty Incident" or more stealth they exist as ways of getting information out in a shared manner, but I won't go too much into detail about that here.

In conclusion, we need to think about what exactly the platforms that we are using promote us to do and, more importantly, not to do. How can we utilise the communities that we build to stop viewing you as an idol and more as a collaborator. Even if this is very hard because often there is an asymmetry in social effort that needs to be expended for this, how can we create communities that sustain themselves with collaboration? Can we incentivise this behaviour as we do for engagement on currently existing platforms?