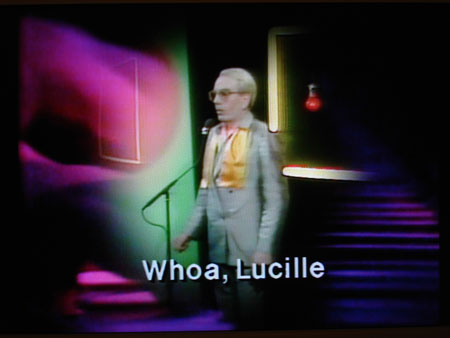 Robert Ashley understood passive watching with the release of his "television opera" Perfect Lives (1983). This piece was not such a conventional narrative story but instead something you could turn on and tune into and out of, filled with non-sequitur and erratic movement between narrative. This truly was a piece of media for television, he understood the medium not only as something that has a certain type of screen and certain type of speaker and certain type of size but the medium of television in whole in situ with it's context of being in a home, having things occur within the home that might take your mind off of what's on screen.

In 2020, and beyond movies have had to deal with similar problems. With most countries (especially America) having cinemas shut, the film industry has been forced into home-viewing as a format. How can film grapple with the fact that it's most likely going to be at least in some aspect passively viewed (as most Netflix users will attest to 'binging', can they really claim to see the nuance in every shot?).

The obvious example for truly passive viewing is that of the Scandinavian slow TV, that is, programmes that are usually multiple hours in length, showing some sort of long process or journey (famously: logs burning, long train rides, icebreakers travelling). These act almost like a very novel painting, when you look away to do some chore and come back you can think "look the train has passed the mountain and now I can see a lake, isn't that beautiful." Slow TV acts almost like ambient TV in this sense, the screen is there and it's on but you can wilfully tune into and out of the experience of viewing.

Some strange thing happened a few Christmases ago however, I was at my father's and in lieu of a fireplace we decided it might be nice to find one of these 'slow TV' type videos of logs burning and put it on the TV. This turned out to be a YouTube livestream; this stream had a live text chat that would appear on the screen. So we decided to all join in on this stream on our phones to make things appear on the screen, first messages like "hello", but others were also watching the stream started sending messages too. So we'd managed to create a sort of instant sociality with this log fire video as a sort of ambient backdrop not only to our homes but also to the interactions taking place in the chatroom. That is to say unexpected, novel, and memorable dynamics came out of adding some extra contextual actions to the media.

This is also clearly present in the current trend of livestreamed gigs and performances taking place now, the performances end up being almost a backdrop to some sort of emergent sociality, with there being a very real context to chat in. One can easily pass comment on something happening on the feed whilst still remaining chatting idly with someone else.

TV also now understands the emergent sociality present around shows they produce, with many competition-style shows having a very strong social media presence (GBBO, RuPaul's Drag Race, so on) that is a direct product of them screening live right now. Even less obvious shows have this, BBC's Question Time and Prime Minister's Questions often has a beat-by-beat social media presences. YouTube has also tried to reproduce this with their "premiers" feature, that is some time before a video and then during it's release, the video is shown as if a 'livestream' (simulcast?) and a chatroom alongside, often joined by the video's creator. This is clearly lost when there is no longer a simultaneous aspect to viewing (i.e. streaming video) where the conversation is less emergent and more 'chatty'.

David Lynch said "If you're playing the movie on a telephone, you will never in a trillion years experience the film," he understood the nature of this, the idea that you are inherently divorced from the experience he is trying to cultivate, that of the sustained, critical, focused watching instead of the passive, unfocused watching inherent at home. After all, movies are made for the theatre, will we see an adaptation to a new idiom of movie for 'at home' watching? What will it look like?